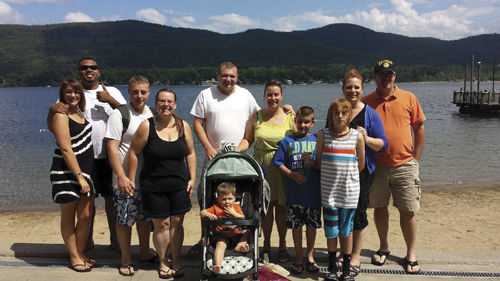 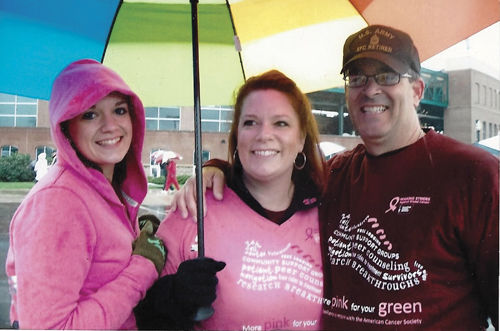 In November 2010, Amy Richmond, first grade teacher with Wheatland-Chili Central School District, was reassuring her older sister Kris that her sister’s mammogram was just a bad image and she’d be fine. Kris had gone in for a routine mammogram and was called back in for more scans. Indeed, the images turned out to be nothing

Six months later in April 2011, Richmond went in for her first routine mammogram. She had turned 40 that year and knew getting a mammogram was the recommended protocol. She wasn’t worried. She was in good health, never felt a lump, didn’t have any risk factors, and had no family history of breast cancer.

Richmond was about to discover the depth of strength that her family provided her.

After her first scan, just like her sister six months prior, Richmond was asked to go back in for more images.

“As I waited (in the waiting room), I began to get nervous,” Richmond says “You’re there all by yourself. I mean, the staff is really friendly but you are ultimately alone.”

To ease her anxiety, Richmond called her husband, Ron, who told her the medical staff was just being thorough. After analyzing the second set of images, she was called in for an ultrasound. Her physician came in and conducted a second ultrasound to confirm what the technician saw. They wanted a biopsy.

Feeling frightened, Richmond called her husband who came down to join her. After the biopsy the physician told her that the medical team really didn’t know if she had breast cancer.

“I just felt like at that moment I knew,” Richmond says. “I called my sister and she asked what my gut told me, and I just knew.”

Hoping for the Best, Fearing the Worst

Overwhelmed. Scared. Disbelief. If there were a gradient of emotions for feeling afraid, Richmond experienced them all as she waited for her biopsy results.

When the news arrived it was the best news inside the worst scenario. The diagnosis was positive. Richmond had breast cancer. The lump was quite large but she still couldn’t feel it. Fortunately, her cancer was very slow growing. The tumor, she says, was in a very deep place in her breast and she was impressed that the staff at Elizabeth Wende Breast Care Center was able to detect anything, especially since Richmond has dense breast tissue.

Richmond opted for a lumpectomy. It was scheduled for May of 2011. But there were many procedures to go through and each one scared Richmond to no end. After healing from her lumpectomy she began the medication Tamoxifen and underwent six and half weeks of radiation at the Pluta Cancer Center.

Richmond’s fears were assuaged by family bonds. Throughout her ordeal, she was bolstered with strength and a positive attitude from her family.

“We’re extremely close and love each other very much,” Richmond says. “They were supportive of me every day, and I wanted to be strong for them. I didn’t want them to think they were losing me.”

At first, Richmond struggled to remain positive and strong. She cried often. She was afraid. After all, both of Richmond’s parents had died of cancer—her mother from lung cancer and her father from lymphoma.

Eventually, Richmond found that nurturing her day-to-day strength and positive attitude came with a side effect: She learned to always look forward instead of backwards, a philosophy that she carries today now that she is cancer-free.

These days, true to her ability to look ahead and stay positive, Richmond is diligent with her health and wellness, getting regular checkups, and she recently lost 30 pounds through Weight Watchers. She is also considering ending her Tamoxifen medication.

“I thought I had all the time in the world,” she says. “But I know that’s not true for anyone and I live fuller for it.”

We’re extremely close and love each other very much. They were supportive of me every day, and I wanted to be strong for them.