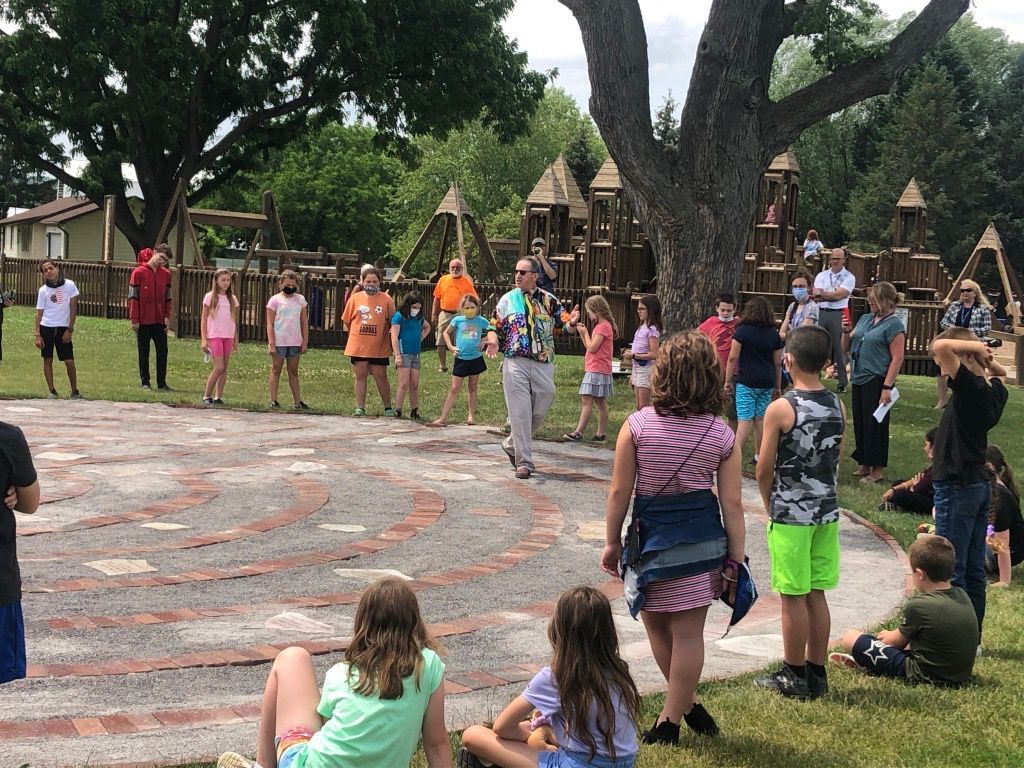 Tim Williams walks the new labyrinth he helped spearhead at Honeoye Central School during a dedication ceremony in June. 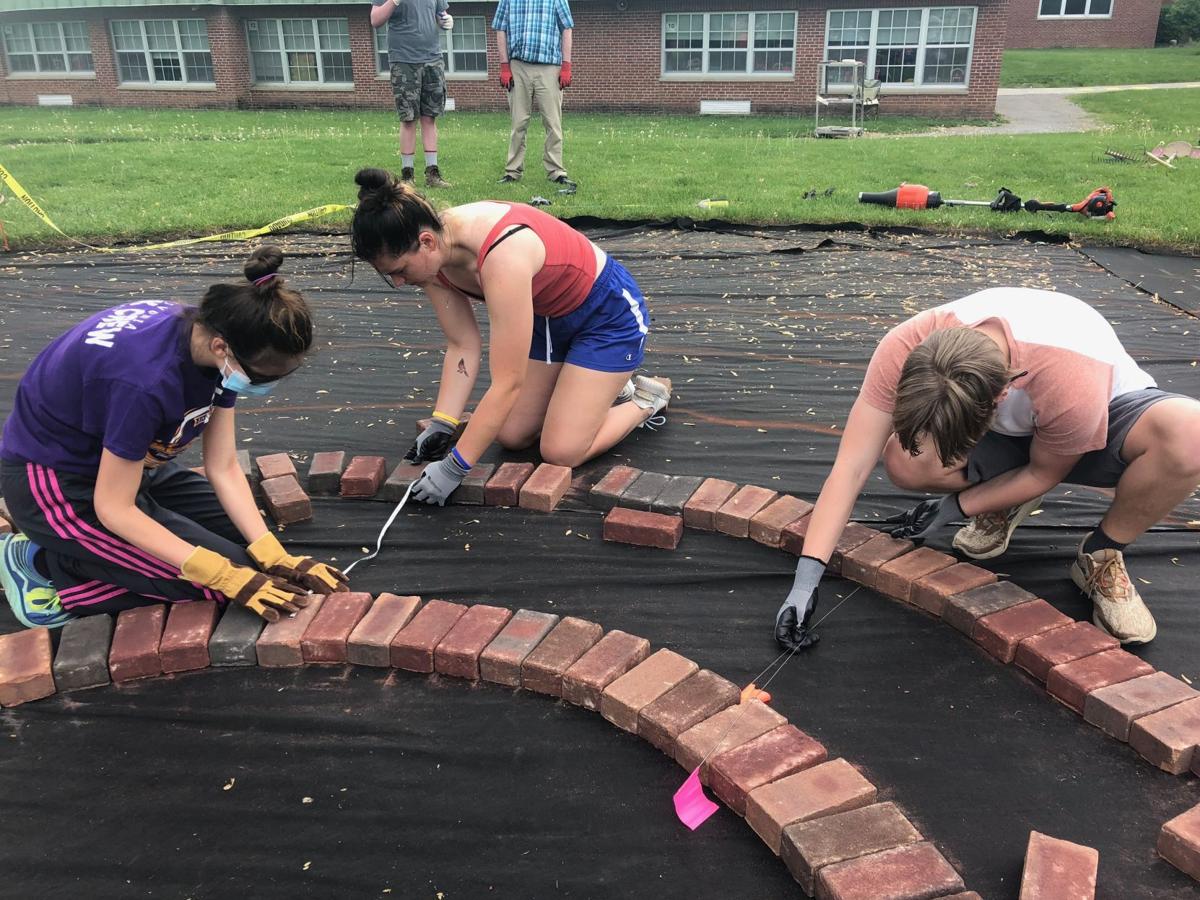 Top Workers lay the bricks during construction of the labyrinth Bottom Tim Williams walks the new labyrinth he helped spearhead at Honeoye Central School during a dedication ceremony in June. 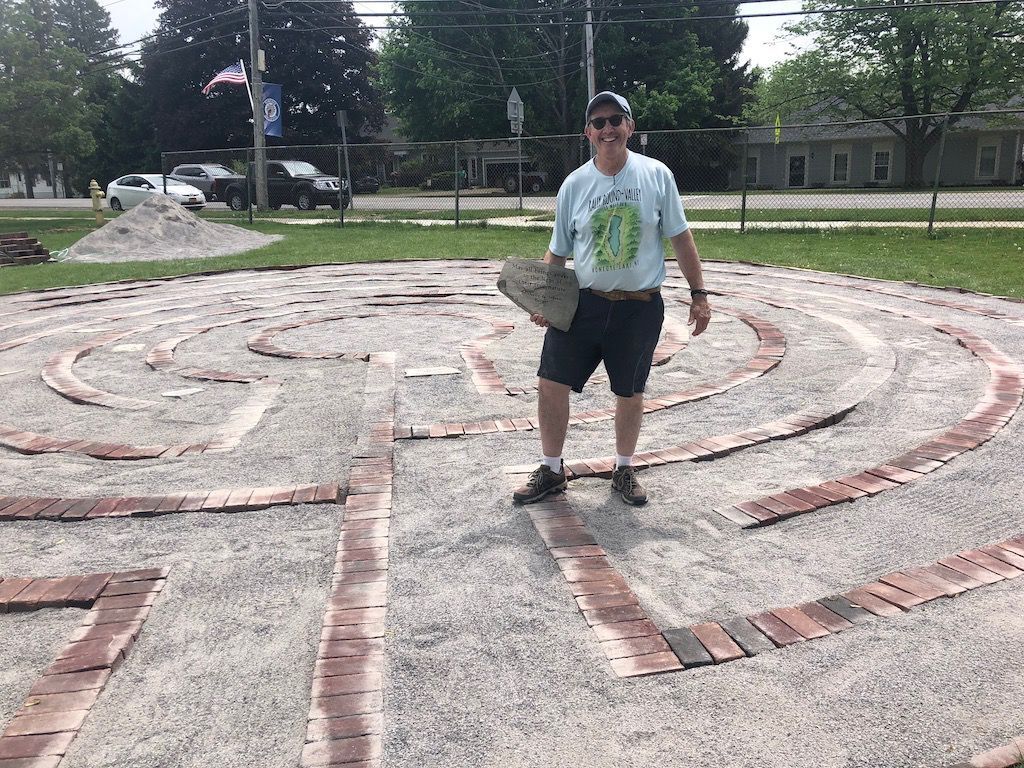 Far Left Tim Williams stands with a nearly complete labyrinth at Honeoye. He holds one of the pathstones inscribed with special messages. Top Volunteers lay the bricks during construction of the labyrinth.

Tim Williams walks the new labyrinth he helped spearhead at Honeoye Central School during a dedication ceremony in June.

Top Workers lay the bricks during construction of the labyrinth Bottom Tim Williams walks the new labyrinth he helped spearhead at Honeoye Central School during a dedication ceremony in June.

Far Left Tim Williams stands with a nearly complete labyrinth at Honeoye. He holds one of the pathstones inscribed with special messages. Top Volunteers lay the bricks during construction of the labyrinth.

When some folks retire from jobs, their employers give them a parting gift.

In Honeoye Central School District, art teacher Tim Williams decided to provide the gift, and it’s one he hopes provides peace and comfort for the school and community for generations to come.

Williams, 63, retired in June after 25 years in education — previously spending another 20 in the hotel and restaurant business. In one of his final acts as an educator, he spearheaded construction of a meditation labyrinth near the school’s playground.

Some 50 students and teachers took part in a dedication ceremony June 21 for the labyrinth, which is 48 feet in circumference.

Labyrinths, unlike mazes, have no dead ends and, while ancient in origin, are being used in modern times to help people meditate and reflect.

Williams says he knew of labyrinths from his research in Celtic history.

“But the impetus for a mindful labyrinth was a lawn labyrinth that I came across while visiting a friend in Bethesda, Maryland, last year,” Williams says.

When thinking of a contribution he could make upon leaving the district, Williams envisioned a labyrinth for students, staff and the community to find solace and inspiration.

He says it also served as a great student project in the midst of the pandemic. The labyrinth creation went beyond class walls to involve volunteers from the community. All told, roughly 100 students, staff and community members took part, Williams says.

After doing research and putting together a design, Williams pitched the meditation labyrinth to the Honeoye Central Board of Education in September 2020, which gave approval.

Additionally, he secured a grant from the Wayne-Finger Lakes BOCES Arts in Education Program to pay for Ann Hubregsen of Josh Landscaping and crew to remove sod and guide the placement of bricks, providing the circular feature in the path.

Recognizing the reflective nature of the labyrinth, the design features more than 60 pathstones adopted by community members with inspirational quotes etched by Dave Leathersich of Madaket Bay Engraving — and there is room for many more.

Williams says Honeoye technology instructor Trevor Lane was instrumental in drawing up precisely measured designs that would be most practical.

“There was a great deal of figuring the correct size, the ease of construction, the use of the environment and long-term maintenance,” he says.

Williams, who has been involved with the Honeoye wellness team over the course of his 25 years, believes in the power of meditation and mindfulness in contributing to better health.

“I have been involved in a number of forms of mindfulness, he says. “I have found walking meditation to be a peaceful process of finding my center, to be in the moment. I find that having a place to go to walk to take the time to be quiet, to let go of daily thoughts. I hope that students, staff and community members will find the labyrinth as a tool for a peaceful walk, to meditate on the quotes along the path. I was recently told that a fellow teacher brought one of her special needs students out, and he used the labyrinth to calm down and focus. The teacher was amazed.”

So are others in the Honeoye community.

They include the Rev. Kenneth McIntosh, pastor of Honeoye United Church of Christ, who spoke about labyrinths at the dedication and is a sponsor of one of the pathstones with inspirational messages.

“It is a well-executed labyrinth,” McInstosh says. “Congratulations to Tim Williams and the students and staff who volunteered their time and talent to make it happen. The arrangement of donors’ stones with meaningful reflections within the walking pathway is something I have not seen before and adds new possibilities for walking the labyrinth. It is also in a very public place, which hopefully will result in more use. And being adjacent to the school playground, I am hopeful that generations of young people will be introduced to labyrinth practice.”

“During his tenure at Honeoye Central School, Mr. Williams’ impact on the lives of students has been immeasurable,” she says. “Tim’s influence and messaging about self care, hope, wellness and worth are embodied in his latest masterpiece, the Honeoye Labyrinth. The labyrinth symbolizes Mr. Williams’ continuing and enduring contribution and legacy to the students, faculty, staff and families of the HCS community.”

Williams, in turn, expresses thanks to Hubregsen, Lane, Leathersich, Aimee Rose, Rebecca Pezzimeni and students and staff of Honeoye for their contributions.